Member of the Most Excellent Order of the British Empire (MBE)

Dorothy Beeson was awarded the MBE in 2015 in recognition of her work looking after sick and injured swans from all over the UK, for founding the first purpose built registered veterinary hospital for water birds in the UK, and for advising on swan welfare requests from all over the world.

Dorothy Beeson was awarded the BEM in 1990 in recognition of her work rescuing and treating swans on the River Thames.

The Swan Sanctuary was given the Queen’s Award for Voluntary Service in 2018. This award is given to groups which are run chiefly by volunteers and provides a service which meets the needs of people living in a local community. It is the highest award given to volunteer groups across the UK so the Sanctuary was very proud to have been selected for the honour. We have many volunteers who give their time and effort freely to The Swan Sanctuary without expecting anything in return apart from the satisfaction of helping our wildlife. We are delighted that all our volunteers have been recognised in this way.

The International Fund for Animal Welfare (IFAW) Animal Action Award was present to founder Dorothy Beeson. The recognition from IFAW in 2015 for a lifetime of work devoted to the saving of, and caring for, wildfowl. 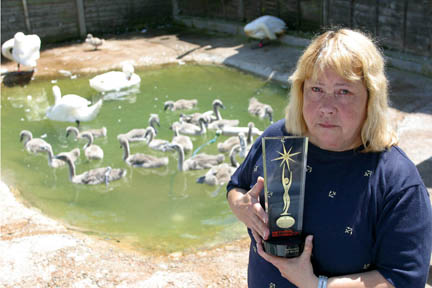 Dot Beeson was out walking her dog one summer’s morning in 1979 when she noticed a swan caught in some fishing line. Although she’d never had any particular interest in birds, let alone touched one before, Dot was determined to help. After enlisting the services of a local vet to free the dying swan, she used her nursing skills to tend him.

Whilst keeping a watch over the swan and its seven cygnets over the next few months, Dot was horrified to discover that they came under constant threat from anglers, pollution and vandals. In total there were 27 incidents in just 4 months and Dot realised that exactly the same thing must be happening on lakes and streams all over the country.

This was the start of a project which has already won the 53-year-old grandmother the British Empire Medal for meritorious service and the RSPCA’s Lord Erskine Award.

Horrified to discover the scale of the problem, Dot offered her services to the RSPCA and started taking in injured swans. However, she soon decided she had to do even more so, in 1988, Dot sold her house and gave up her job in an old people’s home to start The Swan Sanctuary in Egham, Surrey on a two-acre plot leased from the council.

Claiming the only thing she missed was her lovely bathroom, Dot moved into a caravan while she and a team of volunteers dug ten ponds & four rehabilitation lakes, and set up an operating theatre and an X-ray room.

Now Dot – who still lives in a caravan on site – is helped by her daughter, Melanie, and her partner, Steve, as well as several volunteers. On call 24 hours a day, Dot rarely manages to catch more than three hours’ sleep a night.

As well as caring for over 3,000 swans and countless other waterfowl each year, Dot also has to raise over £100,000 a year to keep the sanctuary afloat. “We do it on a wing and a prayer” she jokes. “The strange thing is I’m not some batty old woman who adores birds; I actually prefer cats. But I saw a need and I couldn’t say no.”

Dot now has five small centres around the country and is about to expand even further. Later this year she is hoping to secure a larger site that will also house an education centre to encourage youngsters to learn how to value the environment. [Note, Dot and the sanctuary relocated to the new site in Shepperton in 2005 – see details elsewhere on this web site.] “The problem is greater than ever” says Dot. “These birds are so precious yet they face danger every day from pylons, pollution, anglers and vandalism. If we allowed swans to be wiped out, how could we face the next generation?”

Dot’s devotion to her birds is amazing, considering she prefers cats! Her hard work and energy is making a real difference.

“What is truly humbling is the genuine astonishment of the award-winners at being singled out in this way, their belief that almost anyone would have done the same given the same chance or challenge. Today is a day which not only makes you proud to be British, but also underlines why our country is so special”.