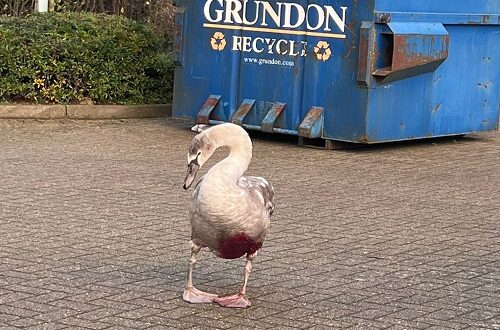 December 2021 – Milton Keynes
It is usually Helen who appears on our photos from the Milton Keynes area but finally we captured a picture of Bryan who does the same sterling work in the area. This cygnet was reported as having landed in an industrial estate and looking injured. By the time we got the photo of the bird in situ it had got quite late so Bryan went out in the dark and found him. There appeared to be a great deal of blood but no obvious wound so the cygnet was taken straight to Tiggywinkles. They later discovered the blood on the body was from a cut in the cygnet’s foot so it is expected to make a full recovery.

Bryan has the cygnet under control