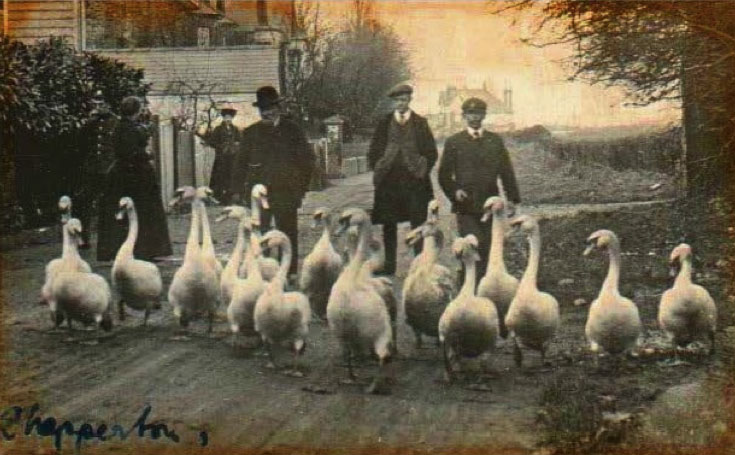 The Swan Sanctuary in Shepperton, one of the charities selected for support by this year’s Mayor, Cllr Vivienne Leighton, performs sterling work in looking after injured or sick swans and returning them to the river whenever possible.

However, they are by no means the first in the village to help the birds.

This photo from 100 years ago, during the First World War (note the soldier in uniform on the left.), shows a flock of swans being driven along Manygate Lane, Shepperton, just where Halliford Studios now stands – the footpath to Gaston Bridge Road can just be seen leading off on the right.

The reason for this strange procession becomes apparent when one reads a report in the Middlesex Chronicle for February 24th, 1917: “THE THAMES SWANS. 50-60 swans were released by Mr Rosewell whose family have been interested in the welfare of swans on the Thames for about 100 years. Bad weather made Mr Rosewell shut the swans in a shed until milder weather”.

Various photos and even newsreel film clips exist showing that this practice of taking swans in off the river in a hard winter and feeding them was carried on for many years. Edward Rosewell’s diary of 10 years before (A Shepperton Diary 1907, published by SSSLHS) describes a very similar scene: ’20th February. They came, and we put the Swans back into the water.

Old Mr Abnett came with young Tom and the two young Turks (the Kingston boatyard family?). The biograph (i.e. a newsreel cameraman) came and took them in the boathouse yard – then took me driving the swans down the lane and going into the water’. There are numerous references in the diary to buying bushels of oats, presumably for feeding the Swans, or boiling up potatoes for them.

It seems that some official body, most likely the Thames Conservancy, must have employed Mr Rosewell for this work, as there are mentions of his being paid. and to telegrams being sent to ask him to take the Swans in.

Later in the year Edward records going up to the Hepworth cinema in Cecil Court, London, where he ‘saw the animated pictures of me and the swans’.

I hope he was satisfied with the results.